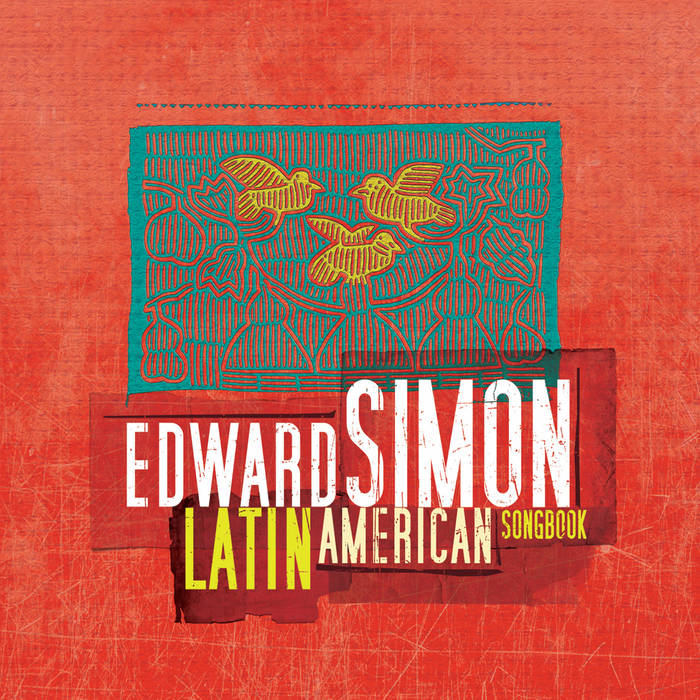 The music of Latin America has long been some of the world’s most beloved, whether Brazilian bossa nova, Argentinean tango, Cuban bolero or irresistible songs from Chile, Puerto Rico and Venezuela. Pianist Edward Simon – a native of Venezuela who has made a name for himself over decades in America as a jazz pianist, bandleader and composer-arranger, along with being a Guggenheim Fellow and member of the hit SFJAZZ Collective – has created fresh, supple interpretations of melodies from all these countries for Latin American Songbook. To be released via Sunnyside Records on August 26th, 2016, the album – the San Francisco Bay Area-based pianist’s 14th – sees Simon leading his working trio with bassist Joe Martin and drummer Adam Cruz. The trio’s subtly virtuosic performances brim with lyricism, color and groove, giving instrumental voice to songs originally made famous by such singers as Caetano Veloso, Mercedes Sosa and Carlos Gardel. The New York Times has praised Simon’s “light, warm touch” as a pianist, while the Jazz Journal International singled out “his deep emotional statements.” JazzTimes said: “Simon is less talked about than many other important jazz pianists from the Caribbean and South America, but he may be the most complete creative artist among them.”

Latin American Songbook is the follow-up to Simon’s 2014 Sunnyside release, Venezuelan Suite, which saw the pianist blend the tuneful, buoyant sounds of his native country with the harmonically sophisticated, forward-looking manner of jazz. These rich compositions - written on a grant from Chamber Music America - featured star saxophonist Mark Turner alongside virtuosos of the Venezuelan folk tradition. All About Jazz marveled over the album: “Venezuelan Suite is pianist Edward Simon’s love letter to his homeland, but that’s not all it is; it’s the perfect confluence of Venezuelan ideals, jazz language and chamber-esque sophistication. In short, it’s a masterpiece.” DownBeat gave Venezuelan Suite a four-and-a-half star review, summing up: “Simon doesn’t forcibly create connections – he opens our eyes to natural connections that have always been there.”

For the new album, Simon created artful piano-trio settings of such songs as Astor Piazzolla’s famously rhapsodic “Libertango” and Antônio Carlos Jobim’s lilting “Chega de Saudade,” as well as the gorgeous Cuban ballad “En La Orilla Del Mundo” (At the Edge of the World), a number jazz fans may know from its appearance on the hit Charlie Haden & Gonzalo Rubalcaba album Nocturne. About these songs and five others on Latin American Songbook, Simon explains: “I grew up listening to and loving this music – it sings and it dances. It’s irresistible. Later, I dealt with this material playing in Paquito D’Rivera’s band in the ’90s, and in my collaborations with Luciana Souza. As a mature jazz artist now, I wanted to delve into these songs more deeply and make them my own. I tried to start from the original source. For something as well-known as ‘Libertango,’ I began by transcribing Piazzolla’s first recording. Then I strove to subtly transform the originals, taking Carlos Gardel’s ‘Volver’ from a tango to a 5/4 jazz tune, for instance.”

One of the elements of making the album that Simon enjoyed most was “the pleasure of the interaction in my trio with Adam and Joe,” the pianist says. “Adam and Joe have such a broad knowledge of music that I can draw at any point on the three key strands of my musical identity – Latin American, jazz, classical music – and they’re right there with me. Adam, who has been one of my most longstanding collaborators over the past decade, is one of the rare drummers who can draw on various Latin ethnic traditions as well as jazz to make something seamless and undeniable of this own. He is such an inventive player, able to orchestrate a groove and help shape a composition. As for Joe, he has such a warm sound on his instrument and is such a solid player you can see why great artists like Mark Turner and Chris Potter rely on him. He’s a very versatile and sensitive bassist, enabling Adam and me to take chances with the music. That’s what makes the music special, personal. I think this album came out wonderfully, and I can’t wait for people to hear how beautiful and expansive these songs can be.”

Featuring Gary Bartz, 5 years of Rhythm Section Intl and an LP of the week by Nicolas Jaar