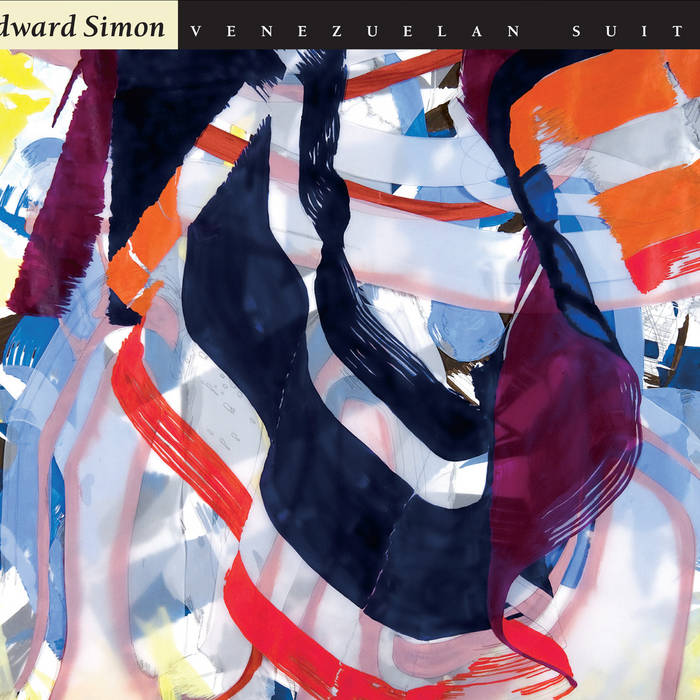 The music of Venezuela has yet to gain the wider renown of many other beloved musical traditions in Latin America, but renowned jazz pianist-composer Edward Simon aims to change that. Simon – a Guggenheim Fellow and member of the hit SF JAZZ Collective, as well as leader of his own fine bands – has blended the color-rich lyricism and rhythmically buoyant sounds of his native Venezuela with the harmonically sophisticated, forward-looking manner of jazz. The resulting album – Venezuelan Suite, his 13th as a leader, to be released January 21, 2014, by Sunnyside Records – sees Simon leading Ensemble Venezuela, which features such jazz stars as saxophonist Mark Turner alongside virtuosos of the Venezuelan folk tradition. Drummer Adam Cruz is one of Simon’s longstanding musical associates, and he joins bassist Roberto Koch, flutist Marco Granados, cuatro player Jorge Glem and maracas ace Leonardo Granados, plus guests Edmar Castaneda on harp, Luis Quintero on percussion and John Ellis on bass clarinet. Along with plaudits for his co-led Afinidad project with saxophonist David Binney, the central Florida-based Simon has earned praise for leading his trio with bassist John Patitucci and drummer Brian Blade – including for Trio Live at the Jazz Standard, their 2013 Sunnyside release. The New York Times has praised Simon’s “light, warm touch,” while the Jazz Journal International singled out “his deep emotional statements.” And JazzTimes said: “Simon is less talked about than many other important jazz pianists from the Caribbean and South America, but he may be the most complete creative artist among them.”

Simon’s four-part Venezuelan Suite – which he composed on commission from Chamber Music America – takes the listener through four of the principal genres of the country’s folk music. Each of the suite’s movements is based on a rhythm or song form and titled after a city associated with its origin. “Barinas,” the birthplace of many father figures in Venezuelan music, centers on the joropo, the country’s lively national rhythm and dance. “Caracas” is based on the intricately syncopated merengue in 5/8 time. “Mérida,” named after the picturesque city in the Andes, is in the style of a Venezuelan waltz. And “Maracaibo” is based on a gaita, a style traditionally played during Christmas time. In addition to his original suite for the album, Simon also arranged Heraclio Fernández’s joropo-based “El Diablo Suelto” (The Devil on the Loose), first published in 1888 – a cornerstone standard in Venezuelan musical culture akin to “All the Things You Are” in jazz.

The sound of Ensemble Venezuela is distinctive, with the bright timbre of traditional Venezuelan instruments – including harp, flute and the guitar with four nylon strings called the cuatro – mixed with the darker sounds of jazz saxophone, piano, double-bass and trap drums. “The group moves from sounding like a jazz band to sounding more folkloric then back again and everything in between,” Simon explains. “But the goal is always an integrated, holistic sound. Jazz has been informed by Latin traditions from the very beginning, as Jelly Roll Morton knew. Then Dizzy Gillespie did so much with the Afro-Caribbean tradition. I’ve always been inspired by that history. Latin American music has such rhythmic vitality, and when you combine that with the harmonic richness and real-time invention of jazz, it yields a profoundly beautiful mix – a real best of both worlds.”

Simon – who first came to the U.S. in 1981 at age 12, then settled permanently stateside after attending the Performing Arts School in Philadelphia – grew up in a musical family in the oil-refinery town of Punta Cardón, Venezuela. His father planted a musical seed with Edward and his siblings, the kids raised on the strains of their dad playing guitar and singing boleros with his drinking buddies. Chucho Valdés was Edward’s first big influence on piano, then he got the jazz bug watching a VHS tape of Dizzy Gillespie and Stan Getz playing at the White House –with “the freedom of jazz” forever instilled in him as an ideal. Years later, during a stint as a young jazzer in New York City, Simon was deeply inspired by the Latin jazz of Jerry Gonzalez & the Fort Apache Band. “They were huge for me,” Simon recalls. “The Nuyorican musicians of the Fort Apache Band were steeped in jazz and Latin music equally deep – they didn’t just play jazz standards over a Latin beat. They were creating a new, hybrid language. I was blessed with the opportunity to play with them in my early days in New York – a dream come true.”

Regarding Venezuela and its musical variety, Simon explains: “The country’s diverse topography has a lot to do with its music: There’s the coast on the Caribbean, the mountains of the Andes, the Amazon jungle, the plains. The ancestries are diverse, too: You have people descended from the original Indians, from Africans and from Europeans, especially the Spanish. The diversity of place and people creates diversity in the music, with even the joropo taking different forms in different parts of the country. The music also has a different instrumentation, a different accent depending on where you are. Along with all the rhythmic subtleties of Venezuelan music – and the percussive sounds of an instrument like the cuatro – the music can also be pensive and lyrical, as with the Venezuelan waltz.”

With Ensemble Venezuela, Simon has a band of remarkably versatile musicians from the worlds of both jazz and Venezuelan music. He explains: “I’ve worked with Mark Turner a lot – he is one of today’s great jazz improvisers, of course. In a band like this, who fills the drum chair is key, and I can’t think of anyone better for this than Adam Cruz. We’ve formed a strong rapport after several years of playing together. He knows so many traditions and can combine jazz and Latin music in an informed, seamless, personal way. I met bassist Roberto Koch in Venezuela. He is one of the most respected bassists there today and was essential for translating the language of Venezuelan music to jazz; being so well-versed in the folk tradition, he helped us navigate the hurdles of knowing when to abide by the rules and when to be free of them. The flute is a common lyrical voice in Venezuelan music, and Marco Granados is a classically trained flutist with a beautiful sound; he’s also fluent in the Venezuelan tradition, so he can improvise in the style. Piano, bass and drums aren’t the traditional rhythm section in Venezuelan music – it’s cuatro, harp and maracas. Jorge Glem is one of the most in-demand cuatro players of the younger generation in Venezuela, and possibly the only one capable of adapting to a jazz setting. The maracas is an instrument that is taken very seriously in Venezuela – musicians specialize in the maracas, like Leonardo Granados. We have great guests, too: Luis Quintero comes from a respected Venezuelan family of percussionists, and harpist Edmar Castaneda comes from Colombia, nearby. Playing bass clarinet is John Ellis. He’s an experienced jazz improviser who has lived in New Orleans, so he has that city’s feel for the music of the Caribbean. His experience allows him not only to adapt quickly, but to bring his own thing to the music.”

Reflecting on the experience of composing and recording his Venezuelan Suite, Simon remarks: “I hope this album helps whoever hears it to discover some of the riches of Venezuelan music. People all over the world love so many different kinds of music from Cuba, Argentina, Brazil. Some of the same beauties and joys are there in the tradition of my native country.”