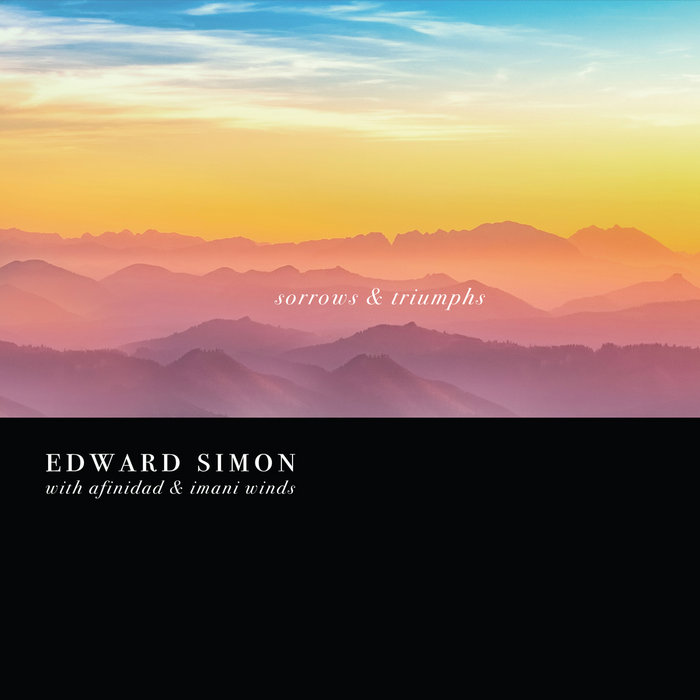 ROWIAL Wonder- & colorful, multilayered & mature compositions, wonderfully played & sung. D’y’ like W. Shorter's Alegria (’03) or his piece Pegasus (’13), with - as here - Imani Winds & Br. Blade? Or J. Hollenbeck’s bigband-songs? And discreet synths at times? This album could make you very happy. Only critical aspect - as on thousands of jazz albums: the rattling &/or dull sound of drums and bass. (Why, did "nobody" replicate the perfect sound from e.g. B. Hersey's Year of the Ear albums ’75 -’79?)

sumbuk I have a much earlier release by Mr. Simon, also with Binney (ex Lost Tribe). While this is a pre-order, I expect it to be just as enjoyable as Affinidad.

Pianist Edward Simon – a native of Venezuela who has made a name for himself over decades in America as a jazz pianist, bandleader and composer-arranger, along with being a Guggenheim Fellow and member of the hit SFJAZZ Collective – presents his latest album, Sorrows and Triumphs, via Sunnyside Records on April 20, 2018. The recording showcases his virtuoso quartet Afinidad, featuring alto saxophonist David Binney, bassist Scott Colley and drummer Brian Blade; the album’s color-rich arrangements also include special guests: vocalist Gretchen Parlato, guitarist Adam Rogers and the chamber quintet Imani Winds, along with percussionists Rogerio Boccato and Luis Quintero. The album’s material blends two bodies of work commissioned by Chamber Music of America’s New Jazz Works program: the suites “Sorrows and Triumphs” and “House of Numbers,” their individual movements re-sequenced to form a holistic listening experience that brims with a lyricism both intimate and majestic. This release follows Simon’s Latin American Songbook, with the four-and-a-half-star DownBeat review for that 2016 album praising its “grand and sophisticated” sound. Latin American Songbook also won Simon an NAACP Image Award for Outstanding Jazz Album. JazzTimes has said: “Simon is less talked about than many other important jazz pianists from the Caribbean and South America, but he may be the most complete creative artist among them.”

The three tracks on Sorrows and Triumphs drawn from the original title suite – “Equanimity,” “Rebirth” and “Triumphs” – feature Afinidad with Parlato, Rogers and Baccato, the compositions inspired by Simon’s studies of Buddhism over two decades. Afinidad first performed the “Sorrows and Triumphs” suite in 2009 at Walton Performing Arts Center in Arkansas and later at New York’s Jazz Standard, with performances broadcast on NPR’s Jazz Set. “The music isn’t narrative in any way,” Simon explains. “But it was inspired intuitively by the effects Buddhist practice has had on me, the perspective and the little bits of enlightenment that come every day. I wrote my own words for ‘Triumphs,’ but Gretchen has also studied Buddhism, so when I asked her to contribute lyrics to ‘Rebirth,’ she knew exactly how to convey the message. Gretchen is such a special singer, who has the gift making the most of small details to expressive effect. She knows that just a whisper can have a big impact. As for the compositions, I wanted them to bring joy to the listener, to be direct and accessible, with singable melodies.”

The album’s tracks taken from the suite “House of Numbers” – “Uninvited Thoughts,” “Triangle,” “Chant” and “Venezuela Unida” – feature Afinidad with Quintero and award-winning classical group Imani Winds. The ballad highlight “Chant” also includes words and vocals by Parlato. Simon’s compositions explore the cross-cultural resonance of numerology, as well as the musical possibilities that arise when jazz and classical artists combine. The music draws on traditions from Europe, Africa, North America and South America, blending composed structures with sections for improvisation; the numbers 3, 4, 5 and 7 – and their cultural and musical implications – form the basis of the suite’s four pieces. The composer explains: “The number 3, for instance, can suggest triple meters, such as 3/4, 6/4 or 6/8, which in turn can suggest certain grooves, particularly in the music of South America. It can also point to the use of triads and three-bar phrases. Above all, the number 3 points to the even distribution of forces into three equal parts, which suggests balance – an ideal in nature and life.” Afinidad and Imani Winds unveiled House of Numbers in 2016 at California’s University of the Pacific.

Simon Rowe, executive director of Roots, Jazz & American Music at the San Francisco Conservatory of Music, attended the premiere of “House of Numbers,” saying afterward that the blend of the five Imani Winds with Simon’s jazz quartet was “mesmerizing,” as the “writing juxtaposed the lyrical and often dense textures of the quintet with the ever-changing, percolating rhythmic drive of Afinidad.” Reviewing Afinidad’s music-making, All About Jazz described the band’s sound as “wonderful, accessible and deep.” Simon remarks on his bandmates: “Their musicality, openness, and breadth give me the greatest freedom as a composer. I write with the sound and sensibilities of Dave, Scott and Brian in mind, and I depend on our instant empathy and almost wordless communication in the studio. It is our artistic bond of trust, built over many years, that underpins and encourages my exploration in these pieces.” Simon and Binney co-founded Afinidad in 2000, with the kindred-spirit rhythm section of Colley and Blade there from the start. The quartet has previously released the albums Afinidad (Red Records, 2001) and Océanos (Criss Cross, 2007).

Simon and Binney share a 25-year affinity, their musical visions as simpatico as their personalities. “Dave is eclectic, open to all sorts of influences, and has the ability to put them together into something personal, as a player and as a composer,” Simon remarks. “We have both composed for Afinidad over the years, even though this album is mine as a composer. But David’s sharp ear for aesthetic beauty makes him a great sounding board in the studio – in addition to being a featured player, he has real producing chops. He co-produced the track ‘Triumphs’ with me, adding electronics.” For his part, Binney says: “I’ve always enjoyed Ed’s sensitive musicality. His musical concept sums up the way I hear things, and because of his Latin American roots, his rhythmic sense is very strong, which complements the way I play. Sometimes I play with more abandon, and he locks things in. And his compositions have such thought behind them.” About Colley and Blade, who are leaders in their own right, Simon adds: “Musicians who are composers interpret other people’s music in a more informed way, so Scott and Brian have the sensibility to articulate my music with sensitivity to space, to quality of sound, to textural nuance.”

Guitarist Adam Rogers has been part of the extended Afinidad family for years. “He’s such a strong improver,” Simon explains, “and his versatility as a player, whether on electric or acoustic, adds a lot to what we can do texturally.” About the additional percussion of Boccato and Quintero, Simon adds: “Groove has always been a vital aspect of music for me, and with a lot of this music influenced by classical minimalism – especially Steve Reich – the extra percussion helps further articulate the groove. And in ‘Venezuela Unida,’ Luis plays the culo’e puya, a long, narrow drum, played in sets of three, associated with Afro-Venezuelan music. This composition is dedicated to my homeland. Venezuela has undergone tremendous socio-economic and political changes during the last decade. It pains me to see the strong divisions that have emerged as a result and the great difficulty people are going through. I wish for my fellow Venezuelans to elevate themselves beyond differences in views and hope they manage to find peace, understanding and unity once again."